“Everybody is suffering. The only way to stop all kinds of suffering is to go to the Goddess. I have incarnated on this earth plane to put an end to suffering not through our ingenuity and technology, but through the grace of the Goddess.”

Dr. Pillai and the Siddhas teach that in order to fully overcome suffering, the Goddess’s involvement is vital. But, which form of Goddess to approach? According to the Siddhas, there are many different Goddesses, but they are only active during certain times. Dr. Pillai has identified four supreme forms of the Goddess who are most active and willing to intervene in your life at this time. Together, these Goddesses can resolve all kinds of suffering, and also gift you the complete intelligence and power to embody your fullest expression as an incarnation of God.

The intuitive revelations from these Goddesses are what led Dr. Pillai to commission these new 48-day ceremonies targeted to invoke the grace of these four different Goddesses.

What Makes These Ceremonies Unique?

“If a traditional Siddha was to be involved in delivering this, he would say, ‘No, no way that I am going to make these mantras available. Although they are available on YouTube and in other places, but the Siddha will not put his energy behind the sounds. The mantras work only when there is a blessing from the Master.” — Dr. Pillai

While Navaratri is a powertime for all forms of feminine energy, Dr. Pillai has intuited several Goddesses who will be the most prominent for Navaratri 2020. They will be among the easiest to access, and thus, will have the potential to give you the most powerful results. Dr. Pillai recommends we work with these Goddesses during this time to change our destiny. He created this program to empower us and teach us how.

In the Return of the Goddesses Program, Dr. Pillai will impart special initiations and empowerment into the following Goddesses:

“Bala is the Goddess who combines all the three traditional Goddesses which are Parvati, Saraswati, and Lakshmi. That is why Bala is the Goddess for the Siddhas. Because she had such incredible power to kill the most powerful demon that ever lived, the Siddhas went after her and prayed to her to get Siddhi powers, supernormal powers, miracle powers, and then they kept her as a secret Goddess. How to worship her even today remains secretive. I am going to give the mantras, the sounds that will invoke her.”

According to Dr. Pillai and the Siddhas, and also sacred scriptures, invoking Bala through the proper means can give you an opportunity to experience:

"Shreem Brzee is the ultimate wealth Goddess.. She is not only going to give you material wealth, but the greater wealth of consciousness, of understanding of knowledge, of seeing beyond matter. Matter, the material wealth will be only a byproduct. You will get what I call as: 200% Life - 100% Material Wealth, and 100% Spiritual Wealth. It will be a flawless life.”

According to Dr. Pillai, invoking Shreem Brzee through the proper means can give you an opportunity to experience:

“Varahi is a very accomplished Goddess with great power. She can both destroy the enemies and give you money. This is a very rare combination unless you go to Mahalakshmi, because the ordinary Lakshmi will not kill. She is Maya, wife of Vishnu and she will give you money, luxury, happiness, clothes, home - all these things, but Varahi will do that equally good or even better than Lakshmi, and also destroy negativity within you and also from outside. That is the specialty of Varahi. That is why I chose her.”

According to Dr. Pillai and the Siddhas, and also sacred scriptures, invoking Varahi through the proper means can give you an opportunity to experience:

“Vyasa Draupadi can be worshipped as Lakshmi, Parvati, and Saraswati - she is the embodiment of all Goddesses and has infinite power. Her role is to bring you happiness, fun, and lots of material blessings that pertain to this world. She is the one who is going to bring wealth and status for women. Women have been abused all over the world and now that will change. She is also the Goddess who is in charge of bringing beauty to everyone, men and women, and also self-esteem and health. I have been commissioned by the Gods and Goddesses to bring her back so that she can bring dramatic results to end suffering. She is very delighted to come to this earth plane to give you her blessings.”

According to Dr. Pillai, invoking Vyasa Draupadi through the proper means can give you an opportunity to experience:

You will have the opportunity to benefit from the following group or individual ceremonies performed for the Goddess of your choice, or all four, for a total of 48 days beginning immediately after Navaratri or Nine Nights of the Goddess.

Fire Labs to the Goddesses

Performed at Dr. Pillai’s temple, the fire labs to the Goddesses will be performed on the first and last day of the program to invoke the unique life-transforming blessings of each of the four Goddesses.

Fire ceremonies are considered to be the most evolved spiritual technology on the planet and the quickest shortcut to obtain wealth. Fire labs will be performed to the Goddesses on your behalf targeted to invoke their fast and powerful intervention in your life: 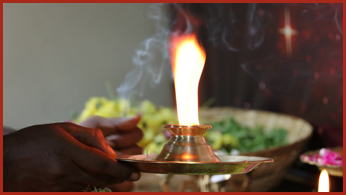 Archana and Aarti (Light and Sound Offering) to the Goddesses

The following Poojas will be performed at Dr. Pillai’s temple to help establish a heartfelt connection with the four Goddesses and are believed to invoke the following blessings:

Daily Food Offering to the Goddesses

The favorite food offering to each Goddess called Nivedhyam will be offered daily for 48 days to the Goddesses at Dr. Pillai’s temple to invite the following blessings:

Join the 2020 Nine Nights of the Goddess Program

You can enroll in each of the 48-day Goddess ceremonies separately or join the 4-in-1 option to participate in all. Group or individual participation can be chosen based on your preference.

Choose Your Package Below